There’s nothing cozier than a fluffy and overly topped baked potato. Except for the one you can sip! Loaded potato soup is trending on TikTok, and for good reason. The hearty soup is simple to make and inexpensive. It tastes like a baked potato, but you can prepare it all in one pot. TikTok creator Britscookin was the first to officially post a step-by-step loaded potato soup recipe, and her method has been replicated and reinterpreted by hundreds of users.

Loaded potato soup can also be kept in the fridge in a sealed food storage container for up to five days, or in the freezer for about three months, so you can have some on hand whenever you’re craving a creamy, and crispy, soup dish. Get creative with your mix-ins and toppings, and loaded baked potato soup may become one of your cold weather staples. Here’s how to make it.

Follow this simple loaded potato soup recipe if you’re ready to make the beloved TikTok dish. Once you’ve got this basic recipe down, feel free to customize it to your liking!

There are seemingly unlimited ways to upgrade your loaded potato soup. Add some of your favorite potato chips on top for garnish. Add a scoop of caviar. Adorn with fresh herbs, such as chives or parsley, or microgreens for a hint of freshness and health. Try using homemade stock for a bolder flavor.

Swap your potato varieties. Go for red potatoes, yellow potatoes, fingerlings, or even a mix to play with flavor, color, and texture. Don’t skin the potatoes if you don’t want to. Or, save the skins and fry them up for a crispy garnish.

Make a vegan version of loaded potato soup by starting with vegan bacon cooked in olive oil. You may need more olive oil to cook your aromatics, and then use unsweetened plant-based milk for creaminess, and plant-based shredded cheese to top it off. Stir in a pat of plant-based butter for extra richness, if desired.

Lighten up your soup by swapping out the cream for half-and-half or 2% milk. Add some richness to the thinner broth by adding a dollop of sour cream or yogurt before serving.

And if you're not a cheese fan, try Real Simple's Creamy Potato-Cabbage Soup recipe instead. While this dish does include a dollop of sour cream, it really stars green cabbage, Yukon Gold potatoes, onion, and carrots.

Add more protein to your soup by stirring in diced ham or sliced sausage before the potatoes and letting the meat simmer in your soup. You can also stir in more veggies with your cheese, including frozen peas, frozen broccoli florets, or frozen spinach, for an extra hit of vitamins.

Spice up your loaded potato soup by using chorizo instead of bacon, adding cayenne pepper to our seasoning mix, and garnishing with chili crisp. Sliced fresh jalapeños or pickled jalapeños would be a great garnish too. Really, if it would go well on a baked potato, it would work here. 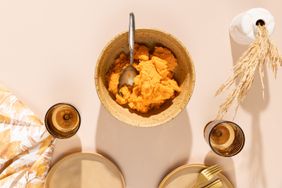 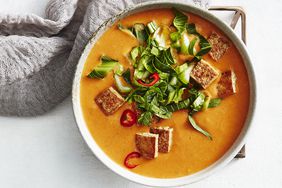 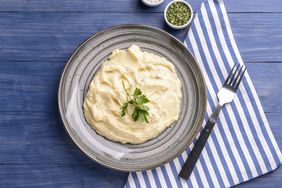 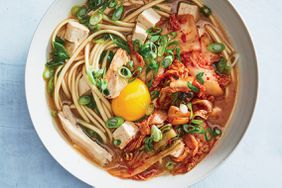 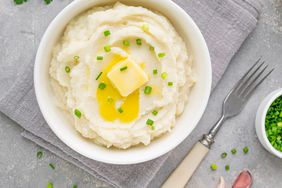 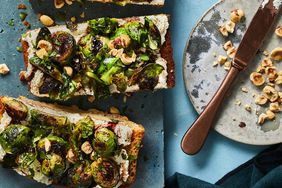 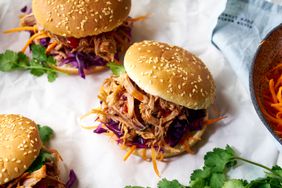 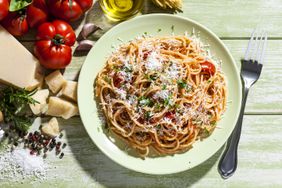