Host Hack: HelloFresh's Thanksgiving Meal Kit Could Save You Around $200 On This Year's Dinner

Preorder your box before November 18.

Bridget is an associate editor for performance marketing at Verywell. She has three years of experience writing for a variety of Dotdash Meredith brands, covering a wide range of topics like subscription services, meal kits, and home products. Highlights: * Bridget is the associate editor for performance marketing at Verywell where she works on health, family, fitness, and mind content * Bridget graduated from Iowa State University with B.A. in advertising and a business minor * Bridget's work has appeared in Real Simple, People, InStyle, Southern Living, Food & Wine, Better Homes and Gardens, Shape, Parents, and Health

Only hosts know how much work goes on behind the scenes to throw a successful Thanksgiving gathering. There are several tasks to get done before the big day, such as cleaning and decorating, but your main focus is usually on the menu. Between a shortage of small turkeys and ongoing COVID-19 cases, there's no better time to find an alternative to your annual grocery store run. Our solution is our favorite meal delivery service: HelloFresh.

The company has two chef-curated Thanksgiving meal kits to choose from: the Turkey + Sides Box and the Beef Tenderloin + Sides Box. You can preorder your dinner until November 18 (or while supplies last) and select a delivery date between November 16 and November 23. Since the meals sold out last year, we recommend claiming yours ASAP. Note: The turkeys are shipped frozen, so you need four days to let them thaw before cooking.

Not only are HelloFresh's Thanksgiving meal kits the secret to skipping the grocery store, but they also can save you money. People who hosted an average of nine guests spent $343.26 ($38.14 per person) on food and drink for their 2020 Thanksgiving celebrations, according to LendingTree. Yes, even during the pandemic. With either of HelloFresh's holiday meal kit options, you'll spend less with prices ranging from $17 to $23 per serving. Who doesn't need a little extra cash during the holiday season?

We tried the turkey box, as it is the most popular option with some of the most classic Thanksgiving dishes. The turkey box provides almost double the amount of servings than the beef one, so you'll want to consider your crowd size before selecting your package.

From the package's arrival to eating leftovers, the meal kit was a very enjoyable experience. The delivery came in two packages and had an impressive amount of insulation to keep the ingredients fresh. Cooking the meal was fairly stress-free, thanks to the included recipe booklet. Each individual recipe had step-by-step instructions with pictures, plus there was even a five-hour game plan that helped us decide what order to make everything. For the tasting portion of the meal kit, each tester was very satisfied with the quality and flavor. The portions were filling; there was a nice balance of sweet and savory foods; and the meal tasted equally good as leftovers.

What We Didn't Love

The only issue with delivery was that the produce was grouped together in one open cardboard box, causing many apples to bruise. We were worried about the imperfections at first, but they honestly didn't affect the quality of the apple crisp. It was just as tasty (if not more) as any other recipes we had sampled in the past. Although we loved the recipe guide, we thought there should be two included so two cooks could each have their own. We also wished the guide would have specified what ingredients we needed to use from our own kitchen, which were butter, oil, sugar, salt, and pepper.

"The spread looked picture-perfect on the table, but I didn't know what to expect in terms of flavor. Overall, I was super-impressed," ecommerce writer Bridget Degnan said. "The turkey and potatoes were tasty, but nothing special. To boost the turkey's flavor, I recommend adding more herbs and vegetables of your own. I absolutely loved the stuffing and roasted squash. The stuffing was packed with flavor, thanks to the chicken sausage and herbs. The star of the show, the delicata squash, had a pleasant texture and sweetness to balance this savory meal. I will definitely be making that dish over and over again while squash is in season.

"My fiancé had a nice portion of the leftover stuffing and potatoes for dinner. He added some butter to the potatoes along with some salt and pepper and licked his plate clean. He said he could've had three more plates," Degnan added.

"All of the dishes were flavorful and delicious, yet not too out-of-the-box, which I appreciated," ecommerce editor Laura Miller said. "This is your traditional Thanksgiving meal like Grandma used to make. It tasted homemade because it was! My favorite dishes were the ciabatta stuffing (this isn't your average boxed stuffing, folks) and the roasted delicata squash and shallots (sweet and savory—yum!)."

"The leftovers still had plenty of flavor without being too dry," Miller's husband said. "I have a physically demanding job, and my lunch kept me full and energized all afternoon. My coworkers were jealous when they saw what I was eating. 10/10 would eat this again."

"I thought everything in the kit was tasty. The squash was my favorite because I don't cook with gourds much, and it was nice to be surprised even in a meal full of traditional Thanksgiving fare," ecommerce editor Anna Knief said. "Each dish was good on its own, but I think anyone comfortable in the kitchen could jazz them up even more with their preferred seasonings. I also thought that the variety of food and portions were well-thought-out. I was satisfied, but I didn't feel overly full. Plus, I'm someone who always looks forward to a second Thanksgiving in the form of leftovers, so I intentionally passed on another helping."

"The apple crumble was fantastic. I'm still dreaming about it," Knief's husband, who received leftovers, said. "The squash was really good, and I thought the stuffing was mild, but had a nice flavor. The potatoes could have used more seasoning, maybe some salt and pepper. Everything reheated well in the microwave except for the turkey and stuffing. Perhaps an air fryer or toaster oven would have retained the texture for those dishes better, but they still tasted good. Overall, I enjoyed having a good Thanksgiving meal in the middle of the workday."

"My husband and I have used HelloFresh in the past, but when I saw the large Thanksgiving spread it exceeded all expectations (the turkey was huge!)," ecommerce writer Carly Kulzer said. "I tried a little bit of everything, and although everything was good, the squash and apple crisp were my favorites by far. Both sides were sweet, seasoned to perfection, and reheated well. My husband really enjoyed the turkey legs and said they were juicy and full of flavor. The only thing we were indifferent about was the stuffing—it was good the first time around, but leftover it got dried-out. I didn't have any leftover gravy, but if I did, I think adding some on top would have made it better."

As hosts, it seems like you're at the grocery store every other day the week leading up to Thanksgiving. First you forget the potatoes, then you decide you want to make another side, and so on. Eventually, you've spent hundreds of dollars, and the reality is a lot of it wasn't necessary. HelloFresh's Thanksgiving meal kit keeps your spending under control, provides you with a delicious holiday meal, and lets you skip the grocery store altogether during one of the busiest times of year. 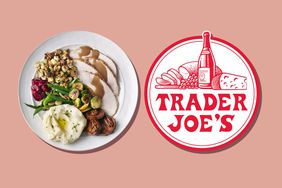 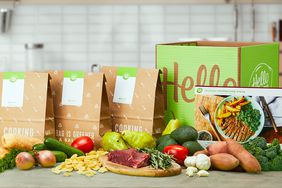 Still Need a Thanksgiving Turkey? These Retailers Have Fresh, Frozen, and Cooked Birds in Stock 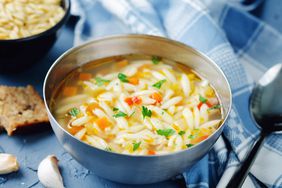