What's Halloween without a carved jack-o'-lantern-style pumpkin? The problem is that most of us don't know how to carve a pumpkin freehanded and need a little extra help getting the job done. So take a shortcut and print out one of these simple pumpkin carving stencils—no design degree required.

Here's how to get started:

If you're still intimidated by your knife-carving skills or have young kids, no-carve pumpkin ideas are also an easy win (and they tend to last longer than carved pumpkins).

Take your pumpkin carving to the 21st century with this template, which is more funny than frightening—and completely adorable.

Nothing says Halloween like a witch. Carve this wicked lady onto your pumpkin for a super spooky effect.

If you're looking for a classic, easy-to-carve design, this stencil is your best bet. The face won't scare young children—even though it has a slightly ominous grin.

Go more magical than wicked with this cute pumpkin design. Bonus: It should be pretty easy to carve.

Somehow, the fangs just make this ghost pumpkin design more adorable. Use this template with kids who like the idea of pumpkin carving but are not masters just yet.

Here's hoping the only cloud of bats you see on Halloween night are the ones carved into the pumpkins on your front stoop.

This eight-legged monster—and some fake cobwebs—will turn your porch into a haunted house.

While we're used to seeing ghosts roaming the streets on Halloween, there's no reason they can't take their place on a pumpkin, too. With this stencil you can carve out a ghoulish ghost that will give off a spooky glow.

Easily spooked by ghouls, goblins, and all things Halloween? Opt for this cat stencil, which is more cute than creepy.

For intermediate pumpkin carvers, this template poses a few challenges, but the final result—a perfect witch pumpkin—is worth the effort.

Go classic with this simple pumpkin design: The ghost is cute and creepy in equal measure.

If the jack-o'-lantern design is just too tame, try this grimacing skull for an extra eerie effect.

The best way to decorate your house for Halloween is to pick a theme and stick to it. Turn your porch or lawn into a graveyard by using this stencil to carve tombstones onto a few pumpkins.

If you want to take the spooky route, try this fiery skull, which is plenty spooky—and a good challenge for anyone looking to upgrade their pumpkin carving abilities.

Witch-themed and easy, this template offers an alternative to the classic witch imagery without leaving Halloween territory all together.

Consider this an intermediate pumpkin design: This ghost pumpkin is dark and spooky but will make any visitor or passerby remark on your carving skills.

The straight lines in this witch design make for an easy pumpkin carving experience. The spider may pose some challenges, but you can always leave it out for a simpler jack-o'-lantern.

Kids will love the shocked expression on this ghost pumpkin design. Take extra care when carving out the fingers—and if they seem too challenging, you can always forgo the arms all together for a more classic ghost silhouette.

Subtle and a little artsy, this witch pumpkin design has some major Wizard of Oz vibes. Best of all, it's relatively simple to carve.

print this stencil
Was this page helpful?
Thanks for your feedback!
Tell us why!
Related Articles 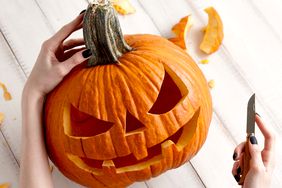 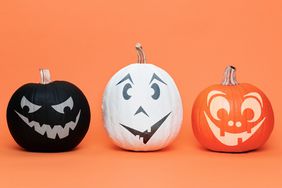 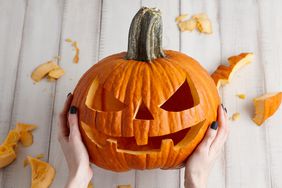 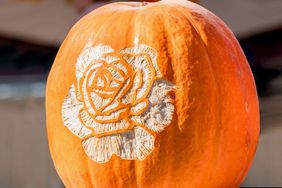 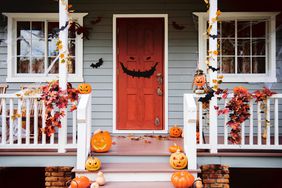 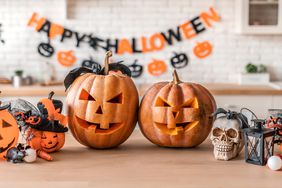 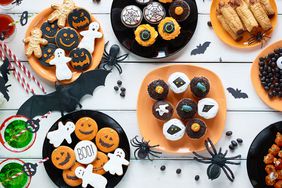 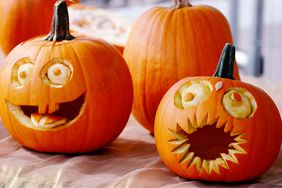 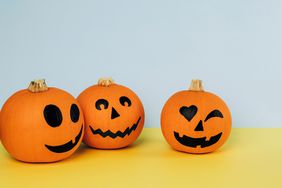 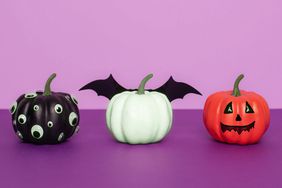 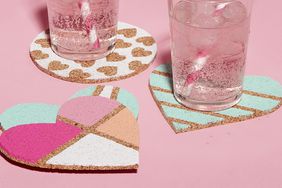 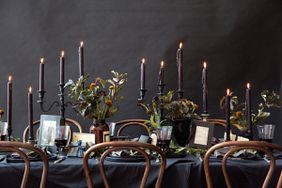 9 Creative Halloween Party Themes That Are So Good, It's Scary 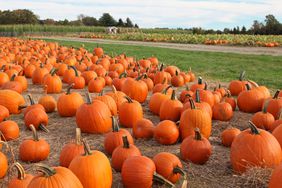