Tips for Packing and Transporting Food for the Holidays, According to the Pros

Learn how to best pack and move casseroles, pies, and more.

Regardless of how far you intend to travel this holiday season (even if it's just a few doors down), we know you won't show up empty-handed. Properly packing and transporting food is no easy feat, even trickier given that broccoli and Gruyère gratin you're planning for a Thanksgiving celebration hours away needs to be packed differently than the pumpkin cupcakes with cream cheese frosting you intend to bake for the office holiday party. Our team of professionals—chefs, restaurant owners, food safety experts, and TikTok stars—share their tips for packing and transporting food safely and efficiently for the holidays and beyond.

No matter what food you're traveling with this holiday season, it's important to pack according to the two-hour rule. "The USDA recommends that perishable foods must be refrigerated within two hours of being cooked, or one hour if the temperature is 90 degrees or above," explains Bob Gravani, PhD, and a member of the Institute of Food Technologists. "After two hours, perishable food will enter the 'danger zone' (between 40 and 140 degrees), which is where bacteria can multiply quickly and cause the food to become unsafe. Be sure to properly refrigerate all food (in small quantities) before they reach two hours at room temperature, and discard any foods that have been left out at room temperature longer than two hours."

Use that casserole dish. While you might be tempted to remove a casserole from the dish you baked it in if you're heading elsewhere, private chef Michael Johnson says that's a big mistake. "The best way to transport a hot casserole is to keep it in the casserole dish and wrap it up with tin foil, then wrap it again with cling film," he says. "Keep the casserole wrapped up in tea towels and make sure that the casserole is in a sturdy location of your vehicle and kept upright."

Aluminum foil is key. "Make sure to double-wrap the casserole in aluminum foil, which has reflective properties to bounce heat back to the food," says TikTok star Yumna Jawad, who is also the creator of the viral food blog, Feel Good Foodie. "This small step will preserve not only the temperature, but also the moisture, smell, and ultimately the flavor of the food."

Let it cool first. Though it may seem counterintuitive to let a hot casserole cool shortly before it's slated to be eaten, this step is crucial according to Charlie McKenna—founder and chef of Lillie's Q, which has locations in Chicago and Florida. "If you're traveling with a hot dish, note that you should ideally let it cool to room temperature before traveling with it. Then you can reheat it at the host's house; just make sure you clarify that in advance with the host," he explains. "It's simply too dangerous to transport piping hot food, especially if you have kids and pets with you in the car or if it's slippery outside. There are way too many things that can go wrong."

Even if a short trip, McKenna still advises against traveling with food that's too hot. "If you're going next door, you definitely still do not want to transport a casserole directly from the oven," he adds. "Let it cool at least to warm before carrying it next door. Be careful and ask for help!"

Or cook it the day before. "If people are transporting side dishes like casseroles to Thanksgiving dinner, they can consider preparing them the day before and, after thorough cooking, refrigerating them properly," notes Gravani. "People can then transport the cold foods in coolers with freezer gels and then reheat them to 165 degrees when they reach their destination."


24 Delicious Make-Ahead Thanksgiving Recipes (Because You Deserve a Holiday, Too)

Put your bakeware to work. "Some bite-sized foods, like mac and cheese bites, can be transported in a covered, large casserole dish to maintain its temperature and moisture," Jawad explains. "However, when it comes to bite-sized food like tartlets or shrimp cocktail bowls, it helps to transport them in something that keeps them upright and separated so that they maintain their form. What I love using for these types of bite-sized appetizers are mini or regular muffin tins, or bakery cupcake containers that I recycle for these instances."

Get creative with aluminum foil. While Nick Martschenko, chef and owner of South End Restaurant Group, prefers to pack bite-sized food individually and assemble each piece at the party or event, he'll also get creative if the appetizers are particularly delicate. "If they are unstable, sometimes I will use aluminum foil and make little beds for them," he says.

Food storage containers to the rescue. "Salads and other cold dishes are best transported in plastic [storage] boxes with a lid clip system to ensure no spillages whilst in transit," Johnson says. "Once the salads have been transported, you can always present them onto plates nicely upon arriving at the venue."

Grab a box. "The best way to transport desserts, including cakes with frosting, is to transport in a cardboard box," Johnson notes. "The box should be large enough to avoid any damages to the desserts and can even be used with dividers for transporting multiple desserts."

Use a specially designed carrier. "For those precious bites that need extra care and attention, like single-serving desserts with piped buttercream frosting, you want a carrier that is going to keep things snug," says Anthony Sitek, chef-owner of the Crown Restaurant Group in Cincinnati. "Whether I'm at home or in the restaurant, efficiency is everything, which is why I'd look for a product that is able to offer multiple purposes." One of Sitek's favorites is the Snapware Snap 'N Stack 2-Layer Carrier, which can carry cupcakes, brownies, cookies, or part of a sheet cake.

Toothpick time. "If I am worried about messing up the frosting, I will put in toothpicks and cover the dessert with aluminum foil like a little tent," says Martschenko.

Assemble fragile toppings on-site. "Prepare anything you can and then assemble it on-site. For desserts with a whipped topping, you can prepare the base in advance and bring the whipped topping with you to do at the last minute," shares McKenna. "Otherwise there really isn't a great way to ensure it doesn't get messed with."

Freeze it first. "If you're transporting delicate desserts such as cupcakes with cream cheese frosting, think about freezing the dessert for one hour before driving," Jawad notes. "That way, when you arrive, the frosting will stay intact without melting or shifting."

For more delicate desserts, like those with a whipped cream topping, Jawad has a slightly different approach. "Look for a dome-shaped lid or tent aluminum foil on top to prevent the top of the dessert from ruining," she says. "It's always helpful to also use a bowl or tray of ice or ice packs underneath the desserts to keep them cool in transit, especially if you have a long distance to travel."

13 Mini Christmas Desserts to Add to Your Wish List
Was this page helpful?
Thanks for your feedback!
Tell us why!
Related Articles 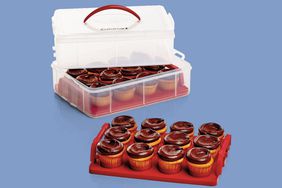 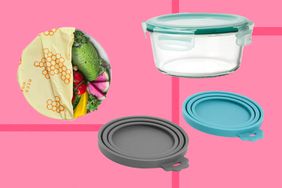 25 Easy Ways to Ditch Single-Use Plastic in Your Kitchen 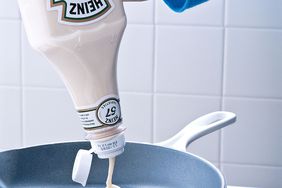 42 Clever Ways to Repurpose Old Things in Your House 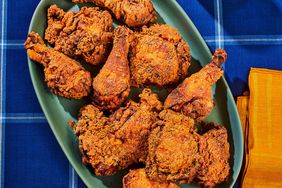 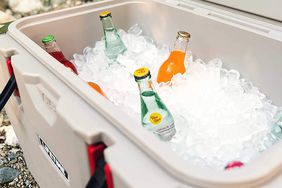 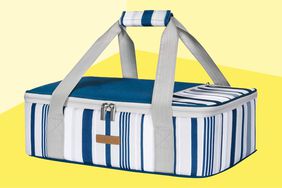