Load up on both types of fiber for a healthy gut and balanced diet.

When trying to make dietary changes to live a healthier lifestyle, the options can seem overwhelming. There are a million different types of food plans that claim that by increasing or decreasing a certain macronutrient, you can transform your health. But what if the secret to maintaining a healthy diet is much simpler than all that?

Fiber is one the most important factors to consider when evaluating what we eat, but it often gets overlooked. While we sometimes think of fiber as that stuff that helps keep us regular in the bathroom, it does so much more than that.

Eating a high-fiber diet is important for maintaining blood sugar, fueling digestion, feeding gut bacteria, and lowering your risk of developing heart disease. Yet most Americans aren't getting nearly enough fiber. "More than 90 percent of women and 97 percent of men do not get enough fiber daily, and thus, dietary fiber is a dietary component of public health concern," says Amy Gorin, MS, RDN, a plant-based registered dietitian.

So what exactly is fiber, anyway? Fiber is a type of carbohydrate that your body can't digest, which means that it passes through your body relatively intact (but doing a lot of work along the way).

While all fiber is good, it's important to know that there are actually two types of fiber that behave very differently in the body. "Soluble fiber is found in foods such as oat bran, nuts, seeds, beans, lentils, and some fruits and veggies," explains Gorin. Soluble fiber soaks up water and dissolves, creating a gel that moves slowly through your digestive tract. "This type of fiber helps to bulk up stool and prevent constipation."

On the other hand, insoluble fiber is found in foods such as whole grains and vegetables. "It helps stool to pass, meaning it helps get things moving through your digestive system and also helps bulk up your stool," says Gorin. Insoluble fiber can be hard to digest and is sometimes the culprit for digestive distress such as sensitivities when eating gluten or other grains, or the reason why you get a little gassy or bloated after eating too many raw vegetables. Its bulk also has the benefit of filling your tummy up after eating, leading to more feelings of satiety.

If you want to reap all the benefits that fiber has to offer, you should aim to incorporate sources of both soluble and insoluble fiber at every meal and snack. "This requires some planning, but after a while, it will become second nature," Gorin says.

Try having a piece of sprouted grain toast with avocado and an egg with breakfast, a side of sauteed spinach with lunch, and an afternoon snack of a small handful of nuts with a piece of fruit. If you follow that up with a dinner that has some veggies and legumes (like these tasty and easy-to-make cuban black beans with rice), you'll be well on your way to reaching your fiber goals and feeling your best.

Foods Rich in Both Soluble and Insoluble Fiber

Breads made from whole grains that have been allowed to begin to sprout before baking offer a higher amount of soluble fiber per serving than most bread on the shelves. Brands like Angelic Bakehouse and Ezekial specialize in sprouted grains and can be found in grocery stores across the country. How do they stack up to their regular counterparts?

"The Angelic Bakehouse 7-Grain Bread, for example, provides an ample amount of fiber—an incredible 4 grams per slice, which is 14 percent of the daily value," says Gorin. "This is largely due to the fact that the bread's first ingredient is sprouted whole grains, which are made of fiber-boosting red wheat berries, quinoa, millet, oat groats, barley, rye berries, and amaranth."

Sprouted grains contain both soluble and insoluble fiber, but their higher content of soluble fiber than traditional bread may make them easier to digest for some people who are sensitive to digesting grains.

These might be one of the first foods you think of when you think of fiber—and for good reason! "Beans, including white and black beans, provide a combination of soluble and insoluble fiber. Fiber is great for stimulating digestion, as well as feeding gut bacteria," says Gorin.

The Many Health Benefits of Eating Beans

Prunes, dried plums, and prune juice are both excellent sources of both soluble and insoluble fiber. "Another benefit for digestion is that prune juice is a natural source of sorbitol, which helps to stimulate digestion by moving water into the large intestine," Gorin says. The naturally laxative effect of prunes means that they're commonly recommended as a natural remedy for constipation, but don't worry—they won't have the same harsh effects as some of the over-the-counter laxative remedies you'll find at the pharmacy.

While most fruits, vegetables, and grains contain both soluble and insoluble fiber, there are some that are better sources of one or the other.

Oats are a great source of a specific type of soluble fiber called beta glucan, which has been shown to play a special role in lowering LDL ("bad" cholesterol). Starting your day with one cup of cooked oats (that serving size is for cooked oats, not dry oats) will deliver 4 grams of fiber, or about a fifth of what you should eat on a daily basis.

While there are many vegetables that contain some soluble fiber, most of that ends up being the insoluble kind. A 1-cup serving of cooked Brussels sprouts, though, contains about 4 grams of total fiber, a little over half of which is the soluble kind.

Yes, Brussels Sprouts Are as Good for You as They Are Delicious—Here Are 7 Reasons to Keep Eating Them

Compared to other fruits, citrus like oranges, grapefruits, and lemons are unique in their high ratio of soluble to insoluble fiber. A small orange contains about 1.37 grams of soluble fiber, compared to only .2 grams in a similar serving size of grapes or cantaloupe.

Nuts are one of the best sources of dense amounts of insoluble fiber. Almonds, for example, pack about 14 grams per cup. It's worth noting that nuts are much more calorie-dense than veggie sources of insoluble fiber, so you don't want to overdo it. But a sprinkle of pine nuts on your veggies or a handful of pistachios for a mid-morning snack is a great way to supplement your fiber intake.

Many vegetables are excellent sources of insoluble fiber, and broccoli is right at the top of the list with about 4 grams per cup. Really, all members of the brassica family (cauliflower, cabbage, turnips) are going to be excellent choices to up your intake of insoluble fiber. Increasing your overall veggie intake is a surefire way to eat regular insoluble fiber due to their high nutrient levels.

Wheat bran, which is a byproduct of the wheat milling process, is another condensed source of insoluble fiber. Half a cup will give you 13 grams of fiber, more than 90 percent of which is the insoluble kind. It has a sweet, nutty flavor and can be added to baked goods, cereal, or used to top smoothies or yogurt.

6 Types of Fruit That Are Loaded With Fiber—Plus, Delicious Ways to Eat More of Them
Was this page helpful?
Thanks for your feedback!
Tell us why!
Related Articles 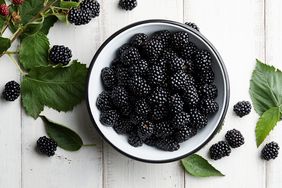 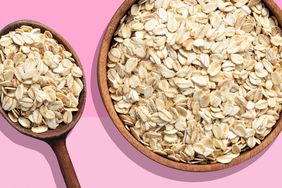 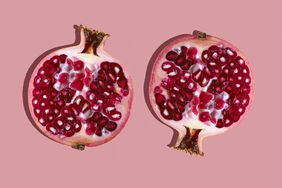 6 Kinds of Fruit That Are Loaded With Fiber—Plus, Delicious Ways to Eat More of Them 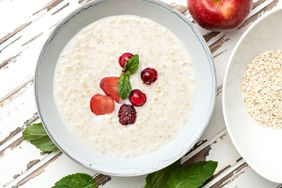 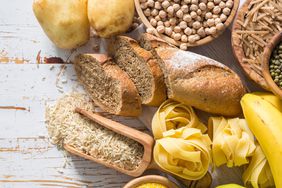 The 7 Healthiest Carb-Filled Foods to Eat, According to a Registered Dietitian 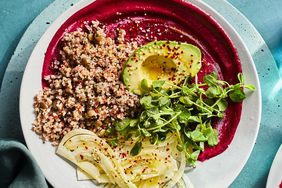 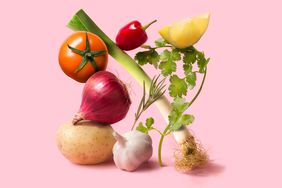 9 Plant-Based Foods You Should Be Eating More Of