Yes, you can make a Thanksgiving menu using only Trader Joe’s dishes.

Trader Joe's just released its Fearless Flyer 2022 Thanksgiving Guide and proved that it is, once again, the grocery chain to visit for all of your Turkey Day needs. Whether you're on the hunt for cranberry sauce or some stuffing to go with your turkey, TJ's has a plethora of holiday musts you can choose from that'll help you save some precious time in the kitchen.

On the stuffing front, for example, the California-based chain has two boxed options (including a gluten-free variety) as well as a heat-and-serve version made with cornbread croutons, dried cranberries, and roasted apples, which debuted this year. Returning Thanksgiving items, like the time-saving Holiday Vegetable Hash and Fresh Cranberry Sauce, are also in stock this year, and Trader Joe's even brought back its unusual Turkey Sausage Stuffing Fried Rice. While fried rice isn't exactly a Thanksgiving staple, this savory entrée infuses the classic Asian dish with several nods to the November holiday, including chunks of turkey sausage, breadcrumbs, and a holiday spice blend.

Whatever you choose, just remember to shop early: Trader Joe's isn't open on Thanksgiving in 2022. Here's a list of some of our favorite classic Turkey Day dishes at Trader Joe's, plus some innovative ones too.

This restaurant-quality side boasts a blanket of rich white cheddar cheese, underneath which you will find cauliflower, butternut squash, and kale. What really puts this heat-and-serve dish over the top is the inclusion of white beans, which add more creaminess and a slightly denser texture. Finished with panko bread crumbs and seasonings that include onion, thyme, and parsley, this side is bound to be a hit.

Sure, you could spend all day scrubbing, peeling, and mashing potatoes, or you could buy these frozen spuds and play them off as your own. Our favorite part about this item is that the potatoes have been frozen and portioned into little cylinders, making it easy to prepare as much or as little as you’d like. This is also great if you want to experiment with a few mashed potato upgrades, such as adding cheese or mixing in some fresh garlic and herbs.

For a side that’s a bit less traditional, give this item a try. Each batch starts with a base of light, nutty bulgur wheat, which is seasoned with aromatic spices like thyme and turmeric. The bulgur is then cooked in a mild vegetable broth with bits of sweet and earthy butternut squash until it takes on a tender texture. Lastly, the bulgur is tossed with chunks of tart, tangy, feta cheese which round out the dish.

With so much focus on the turkey and sides, Thanksgiving dessert can sometimes fall by the wayside. Luckily, Trader Joe’s Apple Crumble Pie costs less than $8 and tastes homemade. The treat features a filling of tender, Northern Spy apples that are imbued with warm cinnamon, and nestled between an all-butter pastry crust shell and a crunchy, buttery oat crumble topping with notes of brown sugar. Go ahead and warm this dessert in the oven while you enjoy Thanksgiving dinner, or serve it at room temperature with a cup of coffee the next morning.

Cranberry sauce is a Thanksgiving staple, but if you don't feel like making it from scratch, Trader Joe's sells a packaged version made with whole cranberries that have been stirred and brought to a boil with water and sugar just until they pop. This deep red sauce is as classic as it gets, but you could always elevate it a bit using one of these simple cranberry sauce recipes as your guide.

16 Recipes For Your Traditional Thanksgiving Dinner Menu
06 of 12

The turkey is undoubtedly the star of the show, but if you're cooking for a small group or don't have many meat eaters in the bunch, whipping up a whole bird might not make the most sense. In that case, no one will judge you if you saunter over to your local TJ's and purchase this Brined Bone-In Half Turkey Breast. The turkey is already fully cooked and marinated in a mixture that includes salt, sugar, black pepper, and garlic-herb butter. It's then seared, and slowly cooked sous-vide, meaning it definitely won't be dry.

But if you simply can't have a bite of turkey that isn't doused in gravy, pick up some Turkey Gravy to go with your protein. All you need to do to enjoy this version is to open it, pour it in your gravy boat, and heat it up in the microwave.

If you're planning a meat-free Thanksgiving this year and have no idea what to put on your plant-based menu, consider this vegan option that even comes with its own vegan gravy. Made mostly from wheat gluten, this flavorful roast is stuffed with wild rice, cranberries, celery and onions. Then, as if that wasn't enough, it's coated in a breading seasoned with herbs and red pepper flakes, in an effort to give it that trademark crispy texture. You can find this Thanksgiving dinner option in the freezer section.

There is certainly no shortage of ways to prepare your stuffing, and Trader Joe's is well aware that many consumers can't get enough of cornbread stuffing in particular. Not only does TJ's sell its own boxed Cornbread Stuffing Mix, which you can prepare at home in under 20 minutes, but the retailer also stocks an even simpler heat-and-serve version of the Cornbread Stuffing in the prepared foods section.

This carb-packed dish boasts a base of fluffy cornbread croutons (just like the boxed version), which are seasoned with herbs such as parsley, rosemary and sage. The stuffing also includes dried cranberries and roasted apples, which add a bright pop of flavor.

Not a fan of slicing and dicing vegetables? We hear you. This hash takes care of all that tedious prep work, as it consists of small dices of butternut squash, sweet potatoes, red onions, and celery, accompanied by parsley, sage, and rosemary. For Thanksgiving, add this hearty mix to your stuffing, or serve it as a healthy side all on its own. Beyond the holiday, this mix is best served sautéed or roasted beside the protein of your choice.

This Thanksgiving-focused item made its debut this year and quickly became one of the most talked about items at Trader Joe's stores around the country. Sure, fried rice isn't your typical Turkey Day fare, but TJ's has definitely given this version a holiday revamp. It's made with long-grain rice, and includes onion, celery, and breadcrumbs (just like stuffing) along with holiday herbs such as rosemary, parsley, and thyme. As if that wasn't enough, this frozen dish also includes familiar Thanksgiving veggies like slivered green beans, corn, and carrots. There are even some fried onion pieces thrown in for good measure.

How to Cook a Thanksgiving Turkey 5 Different Ways—Including Roasted, Deep-Fried, and More
11 of 12

Thanksgiving meal prep can be quite intense, so Trader Joe's has gone ahead and released several pre-cut veggies that will work well as the foundation of a nutritious side dish. While the retailer sells pre-cut produce all year round, the chain ups the ante during the holiday season and stocks generously-sized, two-pound bags of peeled and cut butternut squash or trimmed Brussels sprouts. Both bags are big enough to feed a crowd, and ready to roast (or mash, or bake) to your heart's content this Thanksgiving. For some inspiration on how to use these veggies as part of your holiday feast, check out this gallery of make-ahead Thanksgiving dishes.

If you don't feel like making a potato dish from scratch (there are so many things that can go wrong, after all) but want your guests to think you spent hours in the kitchen perfecting the popular side, consider purchasing these Scallopini Potatoes. Made in Italy, this dish features layers of thinly-sliced white potatoes swimming in a creamy sauce that consists of a blend of provolone, Montasio, Grana Padano, and fontal cheeses. You can find these decadent spuds in the freezer section. 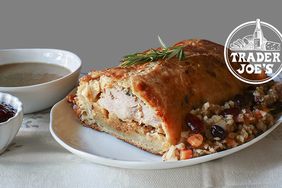 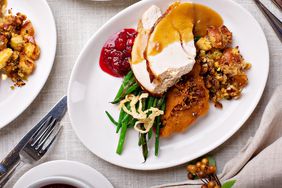 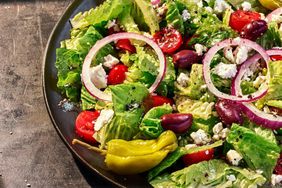 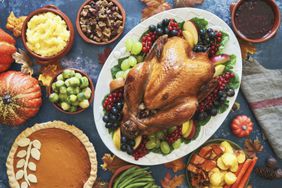