The helpful hacks are back!

Whether you're an avid social media user or a fan of the Inside Trader Joe's podcast, chances are you are very familiar with an array of Trader Joe's hacks. These clever and tasty tricks involve using Trader Joe's products in ways that differ (even slightly) from how they were originally intended. For example, an initial roundup of Trader Joe's hacks included advice on how to transform yogurt cups into frozen yogurt, how to use instant coffee to add flavor to cakes and cookies, and more.

And since these hacks are wildly and unsurprisingly popular, it's no shock that Inside Trader Joe's has now devoted a second episode to tips and tricks TJ's employees swear by. This time around, co-hosts Matt Sloan, vice president of marketing, and Tara Miller, marketing director at Trader Joe's, share tested advice on how to use the store's pizza dough to make monkey bread, how to whip up an elevated pizza sauce using just two TJ's items, and so much more. Keep reading for a new crop of Trader Joe's hacks that will revolutionize how you cook.

This hack from Miller starts with a bag of Trader Joe's Organic Broccoli Slaw. While she notes that many shoppers approach this item as they would a typical coleslaw base, she urged customers to "treat it completely differently." To that end, Miller explained how she likes to combine the slaw with lightly salted peanuts and raisins, before tossing the whole thing with some of Trader Joe's Asian Style Spicy Peanut Vinaigrette. The result is a spicy and sweet salad (with plenty of peanut-y crunch!) that you can serve cold or hot.

While Sloan noted that he loves to prepare Trader Joe's Tarte d'Alsace in a skillet before transferring it to the oven and back again, Miller divulged one of her go-to hacks that requires much less effort—air fryer pizza. According to the TJ's exec, making one of the brand's frozen pizzas in an air fryer is about as easy as it gets and yields a delicious meal. "If you use the air fryer setting, [the pizza] gets much crispier," she shared.

Next, Miller and Sloan talked to a Trader Joe's employee named Alex, who shared one his favorite, versatile hacks. The trick involves Trader Joe's Plain Pizza Dough, which gets transformed into monkey bread thanks to the addition of brown sugar, cinnamon, and melted butter. After some rolling, cutting, dipping, and baking, the monkey bread is ready. "If you want to add some crushed nuts, you can do that," Alex noted. "I also sometimes like to make a watered down cream cheese frosting and just drizzle it over the top. That's really, really good too."

Alex wasn't kidding when he mentioned the versatility of TJ's fresh pizza dough. For the next hack, he dipped the pizza dough balls in butter and the chain's new Ranch Seasoning Blend to create some savory bites that make for a great, easy appetizer. "It's really tasty," Sloan shared. "Who would've thought?"

While Trader Joe's Organic French Baguettes are drool-worthy in their own right, Sloan noted that he likes to buy a fresh one and "reanimate" it by running it under a little cold water and then popping it directly into a hot oven. When the bread emerges, it's got a "crusty crust" with an interior that's still incredibly tender. "You can do this with the Ciabatta Rolls, Ciabatta Baguette, all of those," he shared.

According to Chris, a Trader Joe's employee in Virginia, blending one part TJ's Italian Bomba Hot Pepper Sauce with two parts TJ's Garlic Spread and Dip creates a phenomenal pizza sauce. "That garlic dip is an oil-based dip. That's gonna soak right into the pizza crust and it is going to be so tasty," Sloan noted. Apparently this concoction also works well on roasted vegetables, garlic bread, gnocchi, and as a grilled cheese spread.

RELATED: These Are the Trendiest Condiments of the Summer, According to Whole Foods

"I think one of the best hacks for so many different kinds of products is throwing it in the freezer," Miller shared, before noting that tossing cookies in the freezer pretty much always yields impressive results. Trader Joe's cookies that thrive in a cold environment include the brand's Key Lime Tea Cookies and Lemon Cookie Thins. While not cookies, frozen grapes and ginger (to grate) are also a hit when frozen, as are many Trader Joe's (inedible!) skincare products.

This hack, which has already had its moment on TikTok, entails combining carbonated water with balsamic vinegar. The Trader Joe's team made the trendy drink with the chain's Organic Balsamic Vinegar, TJ's Balsamic Glaze, which has a much thicker consistency, and a new product called Agrodolce White Wine Vinegar. "I'm liking this way more than I thought I would," Sloan admitted. "The Agrodolce was fantastic because it's sweet." Miller eagerly agreed.

As Miller noted, one Trader Joe's store in Minnesota shared several hacks. One particular trick, which she tried, involves making a cake using Trader Joe's Sparkling Pineapple Juice instead of some baking staples. "Using our cake mix, I followed the package directions. I added two eggs, I added butter, but instead of adding milk, I added a can and a half of our Sparkling Pineapple Juice Beverage." According to Miller, the resulting cake was moist and airy.

That same Minnesota store also developed an easy hack for making a photo-worthy two-tiered cake. Per an employee named Jenny, this trick involves Trader Joe's Yellow Cake & Baking Mix. Instead of making the cake in one thick pan, Jenny uses two thinner pans to create two layers. She also spreads Trader Joe's jam or Lemon Curd in between the layers to elevate the dessert, and then covers the whole thing in whipped cream.

Jenny also had a hand in this spicy creation, which uses Trader Joe's Ghost Pepper Potato Chips to coat chicken. The key is to open the chip bag from the bottom, which pushes all the little bits up top. While you can simply use this hack to get the most out of your next bag of chips, you can also take a hint from a TJ's customer and use the small pieces to coat chicken you can later fry. Consider this one a hack within a hack!

RELATED: 38 Essential, Easy Chicken Recipes for Every Night of the Week

Lily Ann, another Trader Joe's employee in Minnesota, is a fan of something she has dubbed Taco Nachos. "What you're gonna do first is take either the Mini Chicken or Mini Beef Tacos and stick them in the air fryer, so that they get nice and crispy with fully cooked chicken. Then you're gonna take some cheese and put it all over those tacos," she explained. "Then you're gonna stick it in the microwave for a minute and take it out, and you have crunchy mini beef or chicken tacos covered in hot melted cheese." Easy enough, right?

This hack, which came from social media, entails transforming Trader Joe's Scallion Pancakes into a crispy taco shell. While on the subject of bread-like products, Sloan noted that he has seen some Trader Joe's shoppers use the brand's frozen Garlic Naan as a grilled cheese bread. "So, thaw it out … then use it as you would to make a grilled cheese," he explained. 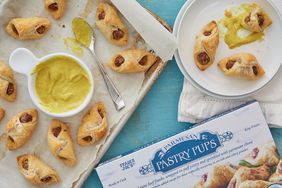