Here, all the simple steps you'll need to make sure your mug is filled with something as nutritious as it is cozy.

There's nothing more comforting than a warm, steaming mug on a cold winter day. And with more and more people spending time outside this winter for socially distanced walks with friends, or just to get out of the house, those hot bevvies have been taking on an even more important role. However, the warm drinks we sip on during the winter are often loaded with sugar, caffeine, or artificial sweeteners. While a good hot chocolate or a mocha with whip is an occasional cold-weather necessity, it's good to save those as occasional indulgences for the sake of our health. We asked Brigid Titgemeier, RD, founder of My Food is Health, to share her tips for choosing warm, comforting drinks that won't interfere with your health goals.

Winter is the time that many of us embrace festive, caffeinated concoctions, like peppermint mochas and espresso martinis, but how much caffeine is too much caffeine? "Caffeine is a stimulant and a stressor on the body," Titgemeier reminds us. "Many people drink coffee for the jolt of adrenaline and cortisol that it provides. This can leave you feeling wired and tired. For many people, this caffeine high is followed by energy dips or crashes throughout the day." That doesn't mean that you should nix caffeine altogether, but you should pay attention to how much of it you consume throughout the day and how it makes you feel—including noticing increases to your heart rate, your quality of sleep, and fluctuations in mood.

Why do we each tolerate caffeine differently? Titgemeier explains, "Your response to coffee largely depends on the gene that is responsible for the metabolism of caffeine: CYP1A2. People are either fast or slow caffeine metabolizers. Fast caffeine metabolizers are more likely to benefit from the polyphenols in coffee and are less likely to experience any side effects associated with caffeine. Those that have a gene mutation to CYP1A2 that makes them a slow metabolizer are less likely to experience the benefits documented in the research." Point being? Know your body, and respect its unique tolerance of caffeine in order to feel your best.

Beware of Added Sugar and Sweeteners

It's no secret that too much added sugar is a general health no-no, leading to everything from chronic inflammation to diabetes to obesity. But the white stuff can sneak into our beverages without us even realizing how much we are consuming. "Approximately 47 percent of America's total added sugar intake comes directly from beverages," says Titgemeier. "Drinking sugar is even worse than eating it because there is no fiber or protein to slow down the spike in blood sugar levels." That doesn't mean that you should never indulge in that sweet hot cocoa, but being mindful of how many sugary drinks you're quaffing is a must for staying well through the winter.

Titgemeier also warns against "sugar-free" drinks that still taste extremely sweet. "Artificial sweeteners are often found in sugar-free syrups that are pumped into beverages. But sweeteners that are artificially made and contain zero nutritional value are not much better than sugar."

Tea, that is. From a health perspective, it doesn't get much better than green tea, especially matcha. "This form of green tea is packed with antioxidants and nutrients such as the polyphenol Epigallocatechin gallate (EGCG) and the amino acid L-theanine. This combination may be associated with improved mood, cognition, and less jittery alertness. Eighty percent of the polyphenols are derived from catechins and 60 percent of those catechins are from the EGCG, explains Titgemeier. "And while matcha contains more caffeine than your typical green tea bag, the caffeine content is still much lower than coffee."

Give Your Beverage a Boost

Even if you're sticking to standard tea or coffee this winter, you can elevate the health properties of any beverage with a few key add-ins:

"Turmeric is one of the most anti-inflammatory foods available in the food supply," Titgemeier says. "This powerful spice packs in polyphenols called curcuminoids or curcumin. Curcumin contains over 100 molecular targets for the body. This means that curcumin helps decrease inflammation through a number of different routes." If you're inspired to make your own healthy-boosting, warming winter concoction, Brigid recommends whipping up a batch of cinnamon lemon ginger tea, chock-full of inflammation-fighting ingredients and antioxidants.

"Cinnamon is another spice that has been shown to have anti-inflammatory, anti-carcinogenic, and blood sugar stabilizing properties," Titgemeier says. "I often recommend those that are trying to control their blood sugar add cinnamon to teas, coffee, and/or foods."

"Collagen is sourced from animal bones, skin, and connective tissue. It is an important and abundant protein found in the body, playing a role in skin health, connective tissue and joint health, gut health, and more," Titgemeier says. "Collagen is very easy to add to coffee or other tea because it dissolves easily in warm beverages and does not alter the flavor profile. This is an easy way to add protein to the diet or to add gut supporting benefits." 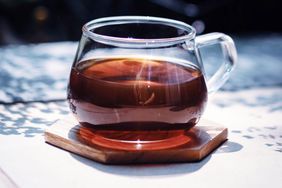 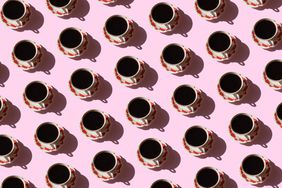 Caffeine Is Actually Good for You, in Moderation—Here's How to Know if You're Having Too Much 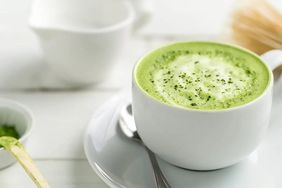 Pistachio Milk Essentials, Plus How to Make It
5 Terrific Ways Tart Cherries Can Boost Your Health 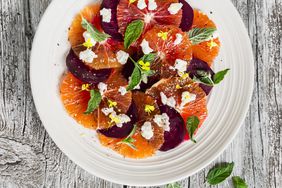