Below, we explain what they are, what they’re made of, and how people eat them.

Since grits are a regional specialty in the American South, plenty of people didn't grow up with this homey dish. Grits originated during the 16th century among the Native American Muskogee tribes of southeastern states, including Tennessee, Alabama, Georgia, and Florida. These tribes are credited with grinding dried corn into a coarse, gritty texture and serving it to colonists. Grits continued to rise in popularity in the South over hundreds of years. In 1976, South Carolina declared grits the official state food, calling them a "symbol of its diet, its customs, its humor, and its hospitality."

There are four basic varieties of grits: traditional stone-ground, quick-cooking, instant, and hominy. While the base ingredient (corn) is the same in all of these, the way it's processed is different (more on that below). Grits are usually served one of two ways: creamy or cheesy. In both cases, the key to smooth grits (without lumps) is to cook them low and slow over simmering heat, whisking consistently.

Since grits typically lack flavor, they are often cooked with butter, cheese, cream, or gravy, and topped with shrimp, mushrooms, ham, or bacon. Shrimp and grits, a traditional Southern preparation, serves as many peoples' introduction to rich, creamy grits. But that's only the beginning: There are more grits recipes than kernels on a cob!

What Are Grits Made Of?

Grits are made with whole dried white corn kernels from dent corn (a variety of corn with a higher starch content, which gives grits their creamy, soft texture). Traditional grits are made by either using stone-ground or steel roller mills; the manufacturing process affects the flavor and texture of the final product. Stone-ground grits are less processed than quick-cooking or instant grits, which means they have more flavor and texture. Hominy grits are cooked by soaking the corn in an alkali solution of limewater (chemical lime, not citrus lime), then the pericarp and germ are removed from the kernels. This process further develops the corn's sweet, earthy flavor. At home, this process can be done in a pot on the stove and in a slow cooker. Instant grits are ground finely, precooked, and dehydrated; the grits can then be prepared in under two minutes by microwaving them with hot water.

Grits range in coarseness, with instant and quick-cooking ones ground finer than traditional stone-ground grits. The smaller the grain, the quicker the grits cook. That being said, coarser grits are the most traditional version.

While some producers of grits may label them as polenta, grits and polenta are two different products. The distinction? Grits are made from coarsely ground white corn, while polenta is made from finely ground yellow corn. This gives polenta its distinct, bright yellow color and a smoother, silkier texture than grits. Polenta is a traditional Italian dish that is usually either baked, boiled, or fried. The other main difference between polenta and grits is that grits are often (but not always) cooked in milk and butter, whereas polenta is usually cooked in a flavorful chicken or vegetable stock.

Traditional stone-ground coarse grits take between 30-60 minutes to cook. For authentic grits with a vibrant corn flavor, we recommend Grit Girl grits or Anson Mills grits. Our three favorite variations on traditional grits recipes include goat cheese grits soufflé, grits pudding, and grits dumplings. Mix in sugar, butter, honey, or nuts for a hearty grits breakfast on the sweeter side.

Was this page helpful?
Thanks for your feedback!
Tell us why!
Related Articles
What Is Cornmeal, Anyway? 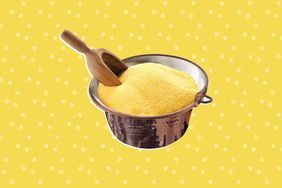 What Is Polenta, Exactly? 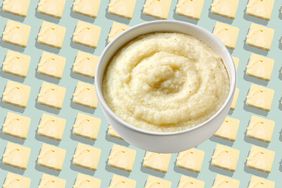 How to Make Grits That Are Unbelievably Creamy and Delicious