If You're an Avid Snacker, Homemade Kale Chips Will Change Your Life—Here's How to Make Them

Whether or not you like kale, you'll love these.

Kale chips almost sound like an oxymoron: the healthiest-seeming food in the world paired up with the least healthy. But really, kale chips made from dehydrated, crisped-up kale are actually good for you, as satisfactory as a bag of their potato counterparts, and so easy to make at home. Avid snackers, it's time to master kale chips.

How to Make Kale Chips

First, you'll need some kale. Really any kale will work, so it's up to your flavor preference. Curly kale, which is bright green in color, is the type most common in American grocery stores, and it kind of looks like oversize parsley. Lacinato (also called dinosaur kale), is dark green, thick, and holds up well in soups. It will make for a slightly tougher chip, like a tortilla chip, compared to the potato chip-ness of curly kale. If it's in budget, prioritize buying organic kale, which the Environmental Working Group (EWG) ranked third on its Dirty Dozen list for 2019.

To start making kale chips, you'll want to unbunch the kale, remove leaves from stems and wash the leaves. Cut or tear the leaves into two-inch pieces and air dry on a cutting board. You'll want to make sure your kale doesn't retain any water, which can prevent crispness.

The best part of making your own kale chips is being able to customize the flavor. If you want salty kale chips, toss the kale leaves with as much salt as you crave before baking. If you want a tangier flavor, add soy sauce. Play around with your spice cabinet to make your own custom seasoning blends (like homemade taco seasoning!), or flavor kale chips with pepper, smoked paprika, garlic powder, Italian seasoning, and more.

Before cooking your kale, you'll want to make sure it's covered in oil to help crisp up those leaves. Coating kale in oil is often referred to as massaging the kale, because it softens up the often-tough leaves, and well, it probably feels relaxing to the kale? Because you won't be using super high temperatures to cook your kale chips, the choice of oil is up to you. You can use extra virgin olive oil, avocado oil, canola oil, peanut oil, or infused olive oils for another layer of flavor. The general ratio is about one tablespoon per bunch of kale, but if your kale seems dry, increase by half a tablespoon. Massage the kale with your hands or salad tongs in an oversized bowl. Now, time to bake.

The lower and slower you bake something, the crispier and dryer it will be. This, of course, applies to kale, but we don't all have hours to let our greens become chips in a 200°F oven. Start with a preheated 250°F oven (as used in our smoky kale chips recipe), spreading out the massaged kale leaves on two baking sheets in a single layer. The kale leaves shouldn't overlap, or the veggies will steam and be soft, not crisp. Set your timer for 50 minutes, and your kale chips should be roasted—you'll know when they look dry and dark green, if they're browning, remove from oven immediately. Let them cool at least 10 minutes.

An air fryer helps crisp up kale chips efficiently and quickly. Massage and season your leaves and set your air fryer to 375°F. Set the kale chips in a basket and set your timer for five minutes. Shake the basket halfway through the air frying (about two minutes in) to help crisp up the chips and ensure they don't stick. Let rest and add additional seasoning, if desired.

Your homemade kale chips should store well in an airtight, room temperature container for up to three days (good luck not eating them all before that). If you need to use them up quickly, crumble them on top of any savory dish, like a salad, soup, pasta, or meat for some extra flavor, texture, and vitamins. 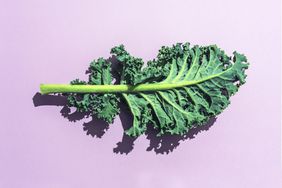 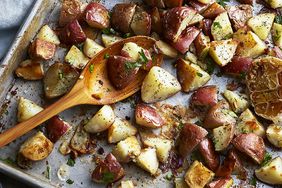