Looking for the ultimate comfort food? Here's just the thing for you, no matter what season.

Lisa Milbrand is a copy writer for Real Simple, with a passion for writing about food, travel, and hacks to make life easier. Loves fancy restaurants, good coffee and her family (of course); not a fan of waiting in lines.

Whether you're just looking for a cozy Meatless Monday meal—or you're eating a plant-based diet full-time—you'll find a perfectly tasty (and easy to make) vegan soup. Switch out your soup options with the seasons, so you can make the most of your garden bounty or farmers market haul.

The best part? Most of these plant-based soups won't take hours of prep to make, making them an easy choice for a busy weeknight.

Tomatoes reach peak season during the summer, but if you're craving tomato soup in winter, canned tomatoes can be used to give you that taste of summertime. (P.S. If you're craving a sandwich on the side, this vegan-friendly, hearty chickpea salad sandwich may be the perfect accompaniment.)

The secret ingredient to give you that yummy creaminess? Bread soaked in vegan milk and pureed into the soup!

This flavorful vegan soup packs plenty of punch, thanks to a generous blend of curry, allspice, and cayenne.

You won't miss the chicken in this hearty vegan edition of the classic Mexican soup—chickpeas and quinoa make perfect, high-protein stand-ins.

Highlight the best of your summer bounty with this flavorful corn and tomato soup. Note: To keep this plant-based, skip the dollop of sour cream or use plant-based yogurt instead.

Lentil soup makes for an easy, hearty dinner—and its sweet, earthy flavor can be easily complemented with your favorite spices. Want to add a little extra crunch to your lentil soup? You can opt for a few vegan cheese croutons to add some texture.

Ginger, cumin, and turmeric spice up this tasty vegan lentil soup. Get the recipe.

Tart lemon balances out the earthy flavor of the lentils to make an easy-to-create soup. (It can be prepped in just a half an hour.) Get the recipe.

If you're looking for something tasty to simmer on the stove on a winter's afternoon, try a cozy, earthy vegan soup from legendary primatologist (and environmentalist) Jane Goodall. Get the recipe.

Cilantro adds a fresh touch to balance out a spicy vegan lentil soup. Get the recipe.

October through April is the peak season for broccoli. In general, broccoli is usually served in cheesy, creamy soups—but you can sub in vegan cheese and yogurt to add a touch of creaminess without the dairy.

Get dinner on the table in 20 minutes or less by serving warming curried broth with tofu, broccoli, and noodles. Get the recipe.

Pack a lot of flavor (and nutrients) into one bowl with this vegetarian soup, which uses potatoes to get . (For vegans, cook the leeks with oil instead—and sub in vegan yogurt in lieu of the sour cream dollop to serve.)

Butternut squash soup may be what you think of when you say "squash soup," but other varieties also make a tasty soup ingredient. Squash are in season from the summer into the fall, depending on the variety, and they store well, so they're perfect for winter meals.

Butternut squash, orzo, and shiitake mushrooms make for a tasty vegan pasta soup. Get the recipe.

Cauliflower has become a hot ingredient for everything from pizza crust to rice to steaks. But its creamy-ish texture really lends itself to some tasty soups—perfect for its peak season, from September to November.

Softened cashews are a vegan's secret ingredient for adding creaminess without dairy—they're used to really give this soup added richness. Get the recipe.

Potatoes are the secret ingredient that makes a plant-based cauliflower soup creamy without a touch of dairy. Get the recipe.

Pair this creamy cauliflower soup with a hearty salad for a perfect fall or winter meal. Get the recipe.

Potato soup generally relies on cheese or cream to add a little oomph to the flavor. You can opt for some of the many new vegan cheeses or yogurts to replace dairy products for these plant-based soups—or try a little nutritional yeast instead to add that cheesy flavor profile.

This super-easy slow-cooker recipe is perfect for busy nights—and the addition of unsweetened cocoa to the sauce gives it a rich flavor. Get the recipe.

This fast and easy sweet-and-spicy potato soup can put dinner on your table in under a half hour. Get the recipe.

Potatoes, cauliflower, and carrots balance out the heat of red curry for this perfect vegan winter stew. Get the recipe.

For the ultimate fall dinner, a pumpkin soup is a perfect autumnal pick. If you don't have a pumpkin available, butternut squash is an easy substitution. 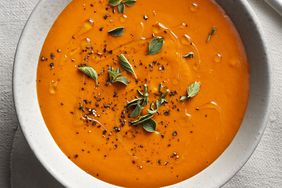 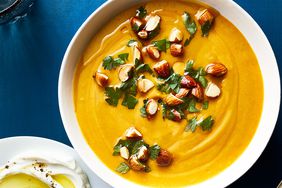 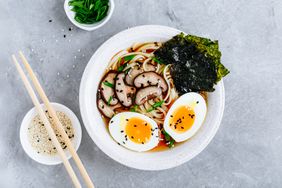 Tasty Shiitake Mushroom Recipes That Are Perfect for Meatless Monday