The irony of a slow cooker? It can make dinner prep surprisingly quick.

Coming home to a hot meal after a long day of work is the ultimate gift. The slow cooker method is a lifesaver for busy families: simply toss your ingredients in, set it, and forget it until dinnertime. Slow-cooked chicken, beef, vegetables, and more are incredibly tender too. For dishes you know you'll want to eat again soon, we recommend doubling up on ingredients and tossing leftovers in the freezer.

This appliance has come a long way in recent years. Many newer models have auto-shutoff and keep warm settings (for times you get tied up in meetings or traffic), LED-lit digital displays, delay start functionality, and multiple temperature settings. Don't be intimidated: All of these fancy features help make slow cooking even more convenient.

Use your slow cooker to soften spuds, like these healthy and hearty sweet potatoes. Pack them with plenty of summer-ready toppings like fresh corn, chopped tomatoes, or crisp chives to bring your farmer's market haul right to your table. Serve with a rotisserie chicken from the grocery store to avoid turning on your stove.

Store-bought salsa is a quick fix to flavor the pork and sauce.

To make this comforting feast, all you need to do is toss carrots, celery, onion, chicken, and a few other ingredients into a slow cooker. Then, about 30 minutes before the chicken is done, you can go ahead and prepare the biscuits. If that last step is a bit too much for a weeknight, go ahead and use store-bought biscuits instead.

Yes, you can make a cake in a slow cooker, and yes, the result is delicious. In fact, slow-cooker cakes tend to be more moist than cakes made in the oven because of how the appliance works. You also don't need to worry about finicky ovens that might cook the dessert unevenly. Using a slow cooker helps ensure that the carrot cake will be cooked evenly throughout.

A spicy-sweet coating of brown sugar and crushed red pepper helps seal in moisture in this pork tenderloin. A hint of umami is added by soy-spiked beef stock. You can use this tenderloin the way we recommend—served over rice with crisp, refreshing cucumbers and carrots, or use it to make quick tacos, a salad topper, or even the meat for a mix-and-match burrito bowl.

This well-priced cut of meat does best when cooked low and slow. Just don't try to make it on the high setting or it may end up chewy and stringy.

Beans can long simmer over a stove eye, but the heat can be overwhelming, especially is warmer months. Opt for cooking beans in your slow cooker instead. You can even skip the overnight soaking step. Use your batch of beans as a side throughout the week or as the base for a soup, salad, or grain bowl.

Serve with rice to soak up the delicious sauce made from apple cider vinegar, soy sauce, and brown sugar.

For this intensely flavorful soup, all you have to do is combine the main ingredients, turn on your slow cooker, and dinner is (basically) done. Once the chicken is finished cooking, you'll just go ahead and shred it and add it back to the soup, along with whatever toppings you like. We're partial to tortilla chips, cheese, sour cream, and cilantro.

Coat the pork with a mixture of tomato paste, sugar, Worcestershire sauce, mustard, and Cajun seasoning to impart sweet, tangy flavors while it cooks.

Making this congee recipe in the slow-cooker not only allows for hands-off cooking, it infuses the coconut milk base with even more flavor. Suggested toppings include cilantro and Sriracha, but almost any savory element tastes great on top—roasted mushrooms, a fried egg, even avocado would all be equally at home here.

While nothing beats a homemade tomato sauce, the near-constant stirring the spaghetti topping requires doesn't leave room for you to do much else during the day. However, if you use a slow cooker to make tomato sauce (in this case a puttanesca) the appliance does all the hard work for you. While the slow cooker is ensuring your noodles will have a rich and tangy sauce, you'll have plenty of time to prepare the easy broccolini side and boil pasta.

Coq au vin is typically a very labor-intensive meal to prepare, which is why it's a great dish to make in the slow cooker. By using the appliance in this case, all you need to do is prepare the bacon and chicken before tossing those ingredients into the slow cooker with everything else. The result is a decadent meal that's ridiculously easy to prepare.

6 Easiest Ways to Cook Chicken Breasts—Including Grilled, Fried, and More
get the recipe
16 of 31

By assembling the lasagna in your slow cooker, as is the case with this recipe, you cut down on both the prep work and cleanup time. Plus, once the lasagna has been constructed, all you have to do is turn the slow cooker on. While the noodles are cooking, go ahead and whip up a side salad and open a bottle of wine.

The key to this dish is garam masala, a mix of spices often used in Indian cooking. It usually includes cumin, cinnamon, coriander, cloves, and nutmeg.

If you like your curry spicy, turn up the heat by adding a pinch of cayenne pepper.

Slow-Cooker Pork With Peppers and Olives

Cuban ropa vieja meets irresistibly tender pork in this easy slow-cooker recipe. The dish also includes a tomato-y bell pepper and onion sauce, along with pimiento-stuffed olives, and generous amounts of oregano, cumin, and garlic. The result is a deeply satisfying and flavorful meal that you can ​​serve with black beans and white rice to soak up every last bit of the delicious sauce.

Slow-cooker pizza? You bet! To make a deep-dish pie, all you have to do is stretch the dough to fill a large slow cooker insert, then top it as you like. Just make sure to cover the top of the slow cooker with a long piece of paper towel—it'll absorb the steam that evaporates during cooking, creating a practically perfect pizza.

Making barbacoa (as seen in these sliders) typically requires hours of slow-roasting and basting, but that's not the case if you dust off your slow cooker. Instead, the appliance melts the seasoned beef into fork-tender submission. Once the meat is done cooking, you'll shred it and pile it onto slider buns with a quick slaw and pickled jalapeños. Dinner is served!

Preparing short ribs may sound intimidating, but they're a cinch to make in the slow cooker.

Our favorite part about this recipe is that you can cook the Bolognese-inspired sauce and the spaghetti squash in the slow cooker at the same time. The result is an easy, hands-off dinner that doesn't skimp on flavor. Shave some Parmesan on top of each plate before serving and you're good to go.

In this recipe, boneless, skinless chicken thighs are cooked in a slow cooker with onions, tomatillo salsa, and poblano chiles. The result is ridiculously tender meat with a tangy taste, which is the perfect tostada topper. While the slow cooker is handling the chicken, all you need to do is make a quick pico de gallo and sprinkle some crumbled queso fresco on the finished product.

Pork shoulder—the star of this stew—thrives in the slow cooker and gets incredibly tender after being cooked low and slow. This cozy soup also includes baby spinach, bite-size ditalini, and a rich tomato broth. Top each bowl off with some freshly grated Parmesan cheese before serving to tie everything together.

This recipe, which is perfect for a cold day, is packed with plenty of ingredients you probably already have at home, including flour, tomato paste, olive oil, and frozen peas. While the stew takes about eight hours to cook, we promise it's worth it.

The slow cooker does wonders for tenderizing meat, and this chili recipe proves that the same is true for vegetables. The vegetarian dish is loaded with sweet potatoes, bell peppers, and a variety of beans, along with a litany of other ingredients you just have to toss in the slow cooker. Top each bowl of chili with sour cream, scallions, radishes, and tortilla chips and you're all set.

Dry red wine and tomato paste give this dish extra depth and layers of flavor.

This simple slow-cooker recipe calls for just two ingredients—chicken and a jar of salsa verde. The result is a mildly spicy shredded chicken dish that is both versatile and delicious. Once the chicken is done cooking, go ahead and use it as a taco base, serve it with a hearty helping of beans and rice, or add it to a bowl of pasta or soup. Whatever your craving, this shredded chicken will come in handy.

Why open a can of chicken noodle soup when this recipe is practically as easy, healthier, and tastier? The family-friendly dish requires surprisingly little hands-on work, and will keep in the refrigerator for up to three days in an airtight container. A delicious recipe that yields plenty of leftovers? That's what we like to call a win-win. 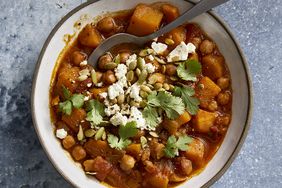 These Slow Cooker Chili Recipes Are So Easy, They Practically Make Themselves 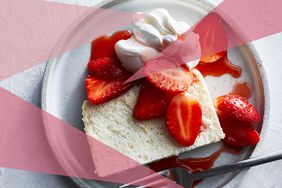 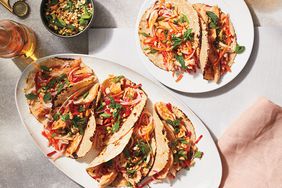