If You Like Smashed Potatoes, Try This Genius TikTok-Inspired Brussels Sprouts Hack

You'll rethink everything you thought you knew about the humble vegetable.

TikTok cooking hacks keep on coming, and we're not complaining. From oat-based cake to walnut-based meat, there's no end to the creativity found on the popular social media platform. Its surprisingly useful tips are giving new life to standard ingredients—and Brussels sprouts are up next for a TikTok-inspired makeover.

You've probably tried, or at least heard of, smashed potatoes. The basic premise is simple: Boil baby potatoes until tender, smash with a jar or heavy object to flatten, smother in oil and seasonings of your choice, and roast to perfection. I don't know why it's taken us until now to apply this cooking method to other vegetables, but TikTok users like @foodingwithfaith, @ballehurns, and @aboutthismuch are showing us how to transform Brussels sprouts into a smashed, decadent variety that rivals the beloved potato.

RELATED: Want to Make a Cooking TikTok? Here's How to Get Started

How to Make Smashed Brussels Sprouts

To make these crispy treats (yes, we're going to go so far as to call Brussels sprouts in this form "treats"), follow these easy steps inspired by TikTok users.

Trim the ends of your sprouts and take off any questionable-looking outer leaves. Leave the rest of the sprout whole.

Drop cleaned sprouts in heavily salted boiling water for 10 minutes, or until you can pierce them with a fork. Next, drain them and place them in a bowl of ice water to stop the cooking.

Once cool, drain again and lay them out on a dishtowel to dry.

Shower them in seasoning.

Lay seasoned sprouts onto a lined baking sheet in one layer. Using the bottom of a mason jar or other flat-bottomed object, smash each sprout until it flattens slightly.

Arrange the smashed sprouts so there's a little space between them for even cooking, and bake at 425°F for 20 minutes, or until golden brown and crispy around the edges.

Dress and serve them. 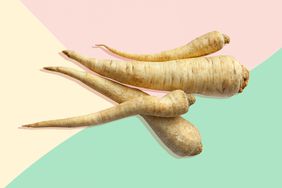 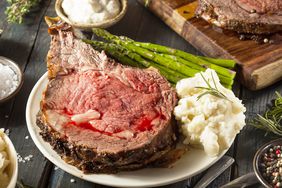