From dough prep to spice advice, professional chefs share tips and tricks for how to make a superior quiche.

What's the ultimate easy dish? For many reasons, we'd like to nominate the quiche: It's delicious for any meal of the day, can be made with a few simple ingredients in your fridge, and is endlessly customizable, depending on what mix-ins you have on hand. It's no surprise this dish is a favorite on brunch menus around the country and works equally well as a quick weeknight dinner, too.

But if you're making quiche at home and are left with soggy, less-than-memorable results, you might need to tweak your approach. We got the scoop from professional chefs around the country, who shared their best tips for making better quiche. Grab your eggs, cream, vegetables, and cheese, and get ready to bake something amazing.

Professional Chefs Share Their Tips for the Best Quiche

The crispy, flaky crust is one of the best parts of a quiche. "But to achieve that tasty outer layer, you need to bake your naked crust a little before adding the egg mixture," says Zakari Davila, executive chef at Willa's in Tampa, Florida. This prevents it from getting soggy. Davila suggests blind baking your crust at 350 F for seven minutes, in addition to the overall baking time. Use professional pie weights to avoid bubbles in your crust, but any variety of raw dried beans poured into the crust would also work. Carefully pour these out after seven minutes (and do not reuse the beans) before filling the crust with your egg mixture.

Use a great dough.

"While any basic pie dough recipe (or even store-bought dough) will do in a pinch, the number one way to make delicious quiche is to make a homemade pâte brisée dough," says Andrew Zimmerman, executive chef at Sepia and Proxi in Chicago. (The main difference between this and classic American pie crust is that pâte brisée contains a bit of sugar, which caramelizes in heat, giving it a deep golden color and a little crunch when baked. It's also more tender than classic pie crust because of the method of mixing with the heel of your hand, called frissage.)

Be sure to rest the dough before rolling it out, and then again before you blind bake it. If you forget this part, your crust may turn out tough and shrink during your blind bake.

Don't forget to chill it.

"Though most people know to do this when baking pies, chilling the dough is a step that often gets overlooked when making quiche," says Qi Ai, chef de cuisine at Travelle at The Langham in Chicago. "Work fast when preparing your dough so you don't warm up the butter too much—you should still be able to see some butter pieces in the dough, as they will form the flaky layers during baking," Ai adds. Chill your dough for one hour before rolling out your crust.

Add another layer of protection.

"After blind baking your crust, create a waterproof barrier protecting it from the moisture of your filling by brushing it with a thin layer of egg wash," Ai advises. "Return the crust to the oven for another three to five minutes after doing this to bake off the egg before adding your filling and baking according to your recipe."

This pro tip from Victoria Dearmond, pastry director for Underbelly Hospitality in Houston, helps to make your quiche extra smooth and custardy. "Add your eggs to a bowl, then whisk them for about three minutes (or use a hand mixer) before adding heavy cream. Whip the mixture again for about four minutes before adding your other ingredients and pouring everything into your crust." (Dearmond notes that for a regular quiche, she uses about six eggs and ½ cup of cream.)

RELATED: Burnt Out on Hard-Boiled? Here Are 12 Other Delicious Ways to Cook Eggs

"Vegetables will take longer to cook than your egg custard, so always sauté onions, steam broccoli, etc. before you add them to your egg mixture to ensure every bite of quiche will be perfectly cooked," says Kristin Beringson, executive chef at Henley in Nashville.

Avoid fillings that are too wet.

"Some vegetables, such as sliced large tomatoes or raw zucchini, have a high water content and will make your quiche soggy (even if you follow all steps to avoid this!)," Davila notes. Instead, he recommends roasting vegetables such as mushrooms or eggplant before adding them to your egg mixture. This draws out moisture, in addition to boosting the flavor profile of your quiche. And if you're using an ingredient such as sautéed spinach, be sure to squeeze the liquid out before adding it to your quiche.

Nathaniel Reid, a two-time James Beard award semifinalist and a bakery owner in St. Louis, recommends switching up your quiche add-ins—from proteins and vegetables to cheese and herbs—in an effort to reflect the season. Some of his favorites to inspire your next quiche include:

Try some of our favorite quiche recipes: ham and leek quiche, Swiss chard and cheddar quiche, and ham and asparagus quiche.

Opt for fresh herbs over dried ones.

Using fresh herbs is the easiest way to level up your quiche with minimal effort—stir some into your base and also sprinkle some more on top after it comes out of the oven. For Dearmond, the easiest quiche is eggs and cream with cheese and a bunch of chives. "There's minimal chopping, no chance of veggies overcooking or releasing water into your base, and it can be in the oven in less than 10 minutes," she says.

RELATED: 5 Simple Steps to Extend the Shelf Life of Your Fresh Herbs

Add a pinch of nutmeg.

Yes, really! According to Beringson, this toasty spice we all love to use in the fall will add a hint of flavor that enhances nearly any quiche ingredients without overwhelming the dish.

"It may sound surprising, but a pie pan isn't the ideal vessel for baking quiche because it's not deep enough," explains Zimmerman. Instead, try a 2-inch deep springform pan, or even a two-inch-high metal pastry ring set on a baking sheet lined with parchment paper. "This depth allows for more silky custard and less chance of overcooking the quiche," he adds.

Many quiche recipes call for preheating your oven to 350 or 400 F. However, Dearmond advises baking quiche at a slightly lower temperature (around 325 F) for a bit longer, so you don't wind up with an egg soufflé. The exact baking time is hard to pinpoint since pan sizes vary, but a good rule is that you want your filling to be set, with a slight jiggle in the middle. "The custard will continue to cook after you take it out of the oven," Dearmond notes. "So if you pull it out when it's still a little underdone, it will be perfectly cooked by the time it cools completely."

RELATED: Here's How Often You Should Clean Your Oven—Plus the Easiest Way to Do It

We know, it's hard to resist digging into your quiche shortly after it comes out of the oven smelling so delicious. "But the quiche will taste better if you allow the final product to cool completely (think several hours or even overnight) before slicing," says Zimmerman. Then, warm up individual slices or serve them at room temperature. (If you won't be enjoying your quiche until the next day, be sure to refrigerate it. Due to the dairy and eggs in the dish, food safety can be compromised if it's left out for more than two hours.) 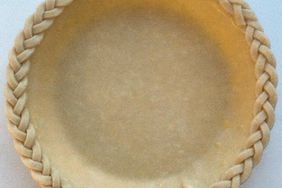 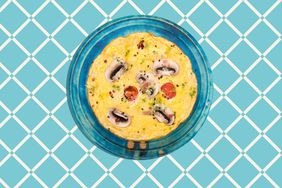 The Secret to Making a Perfect Frittata Every Time 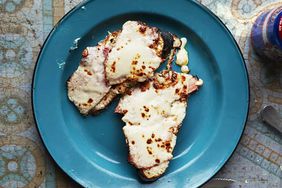 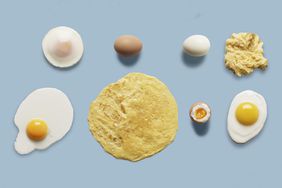 Burnt Out on Hard-Boiled? Here Are 9 More Delicious Ways to Cook Eggs 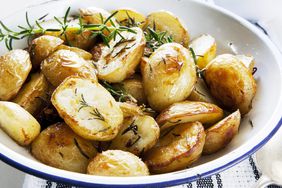 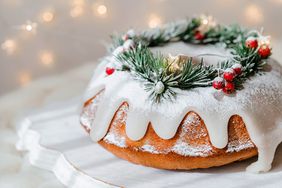 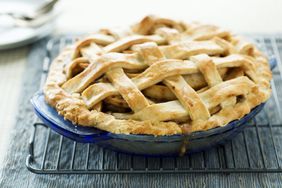 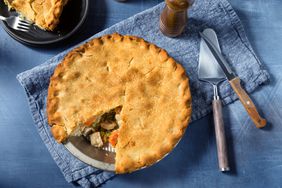