3 Women Who Are Breaking Barriers in the Wine Industry 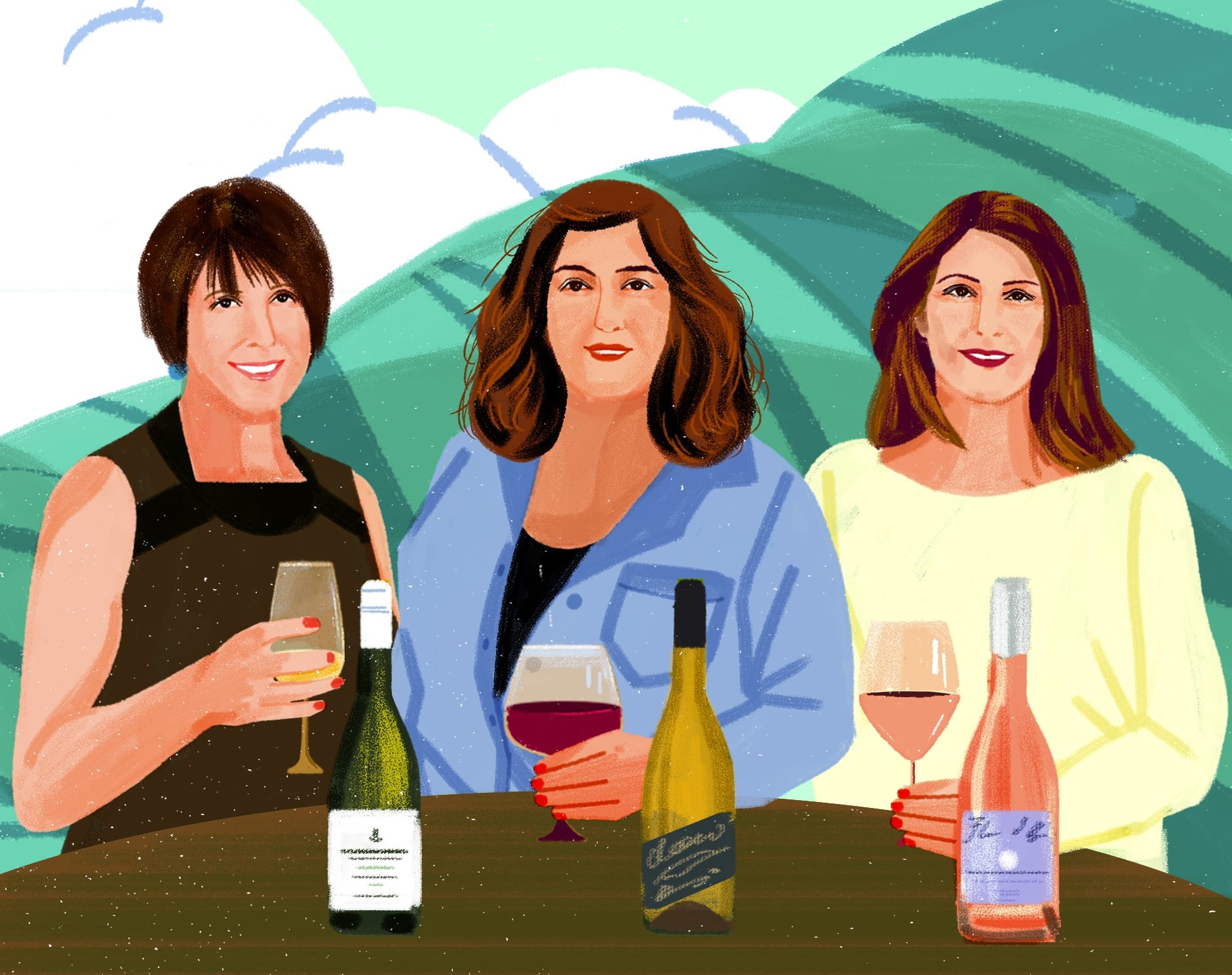 Through the years, women have made incredible contributions to the wine world at every level, from crafting critically acclaimed wines to advancing the science behind growing grapes. Despite this, wine’s history as a boys’ club has made it much harder for women to advance in the industry. But that’s beginning to change.

In recent years, more and more women are challenging the status quo and entering the industry as winemakers, exporters, vineyard managers, and beyond. Not only is the industry more diverse and inclusive than ever before, but the women who have paved the way are also encouraging future generations to follow suit. Whether at the forefront of the rosé boom or following an ambition to make wine, here’s how three barrier-breaking women from around the world have overcome personal and professional obstacles to follow their passion for wine.

Liz Comte-Monk knew early on that French wines were her calling. A native of Marseille, France, and the export manager for Fleur de Mer, Comte-Monk entered the industry before the rosé boom—and she’s been at the forefront of building the category’s international appeal.

“My dream in life was to live in the South of France,” says Comte-Monk, who is now based in the commune of Plan-de-la-Tour, France. “One of the industries that was flourishing in our region was rosé winemaking. Back then, I was fascinated by the world of wine, and I knew for sure my professional life would never be dull.”

Following her studies in international trade, she accepted a position in the export department at Les Maîtres Vignerons de la Presqu’île de Saint-Tropez, a cooperative representing 13 Châteaux and Caves in Provence. Nearly three decades later, she’s now the export manager for Les Maîtres Vignerons and a vocal proponent of the region’s wines, including Fleur de Mer dry rosé, which she calls “the perfect wine” for its versatility in pairing with food and drinking solo, as well as its representation of its birthplace.

“My mission has always been to develop markets for our Provence Rosé,” Comte-Monk says. “I was thrilled to accept the challenge of introducing Provence Rosé to export markets when it was mainly consumed in France and quite unknown abroad.” Comte-Monk manages exports to more than 50 countries, including the United States, which has become the group’s largest market.

While she says that building relationships with her export partners has been the most rewarding aspect of her job, she’s also particularly proud of Provençal Rosé’s incredible success during the past decade.

“My whole career I have promoted rosés, but my greatest reward was Fleur de Mer's U.S. launch in 2016,” she says. “I was so happy that one of our best rosés was distributed nationally and available to so many consumers.”

Through her work, Comte-Monk has developed an acute understanding of how to anticipate the needs of individual export markets. But nothing prepared her for the challenges brought on by the global pandemic, including the devastating blow to the hospitality industry and trade disruptions for the wine industry and beyond. Still, she’s determined to see her industry through the crisis.

“In times like this, you learn to adapt to harsh conditions you have no control over,” she says. But she anticipates brighter days ahead, when “people will be able to share time together and celebrate life,” she adds. “Wine, for sure, will be invited to the party.”

When Sue White first settled in Marlborough, New Zealand, with her husband, Greg, and their young daughter in 1994, she had no idea how to run a winery. The couple had left their corporate jobs in Auckland a few years earlier so the family could sail around the Pacific Islands, settling on the Southern Island for a period each year to wait out hurricane season. Eventually, the region and its burgeoning wine scene pulled them in for good.

“When we came to the Marlborough Sounds, we fell in love with the area,” White says, noting that there were far more vineyards and growers than wineries in Marlborough at the time. “We had good friends producing grapes here in Marlborough and helped them plant. When I was pregnant with Samantha, we decided to sell up entirely in Auckland and came down to Marlborough to start a new adventure with our baby girl.”

Though their business acumen proved a boon on one side of their endeavors, the family still needed to enlist winemaking expertise. So, they hired a winemaker from Gisborne on the North Island to help them launch Whitehaven. Their first vintage, made at a contracted facility, was released in 1994. “We decided we should spend our money on a winery and initially do some contract winemaking to pay the bills,” White says.

The following year they opened their own winery, “and away we went.” From early on, the winery was a success, earning critical acclaim and several awards. They soon had to move their operations to a larger facility in Blenheim. But in 2007, Greg passed away. White was faced with what she calls the “biggest challenge” in her wine career: whether or not to keep the winery running.

“With Samantha, I wanted to have a legacy for her that was both her parents’ dream,” she says. “So, with help and support from family and friends, I did.”

In recent years, White’s leadership and dedication to the vision the couple shared have propelled the winery to even greater success and further established its legacy. The 2019 vintage of Whitehaven Sauvignon Blanc received a 90-point score from Wine Advocate. And last year, her daughter joined the winery team to further carry on the family business.

“All my wines are important to me,” says White, who adds that she’s a big fan of Marlborough-style Sauvignon Blancs and Chardonnays. “My winemakers have carried on this tradition, only producing the very best from worthy vintages.”

When Saman Parsa emigrated to the United States from Iran to attend the University of California, Davis, she had every intention of pursuing a career in academia. After graduating with a degree in plant biology, she accepted a position as a research assistant at Stanford University. But as time went on, inspired by the viticulture and enology courses she had taken during her time at school, she felt a growing urge to pull away from academia and move toward wine.

“With a passion for wine, I decided to leave my academic research job and do a winemaking internship [in Windsor, California],” Parsa says. “It was the best decision I have ever made.”

Following her internship, Parsa threw herself into the wine industry full force, working back-to-back harvests in New Zealand and California. Though it was not a “glamorous” job, she says the intersection of science and art in winemaking kept her “going back for more.”

“Each harvest season, I got a chance to learn from Mother Nature and experienced winemakers on how to make the perfect bottle of wine,” Parsa says. After working as a production manager and seasonal enologist at various California wineries, she landed at Frei Ranch—a vineyard that supplies grapes to a variety of different wineries—in Healdsburg in 2017, where she began working closely with Storypoint as an enologist. Only a year later, she was promoted to assistant winemaker and, soon after, lead winemaker.

“The biggest lesson I’ve learned in the wine industry, and in life actually, is that hard work is the key to success,” Parsa says. “There is, of course, some element of luck involved too, but I have learned that with most challenges that are presented to you in the industry, if you work hard, you will be able to conquer them.”

Her education in plant biology, diverse background, and tenacity have given Parsa an edge in her winemaking career. At Storypoint, it’s up to her to choose fruit from California growing regions that allow her to “build layers of interest into the wine.”

“My science background gives me an advantage in the science side of winemaking, and my cultural background gives me an advantage in flavor profile and palate refinement to make more interesting wines,” Parsa says. “Now as a winemaker, I continue to learn and refine my palate to take the grapes from vine to bottle. I love the seasonality of wine—one day you get to taste the grape on the vine and the next you are blending the wine to become its perfect self. And next year you get to do it all over again.”

WANT TO BECOME A LEADER IN THE WINE, SPIRITS OR HOSPITALITY INDUSTRY, OR KNOW A WOMAN WHO DESERVES TO BE RECOGNIZED? HERE’S HOW TO APPLY FOR THE E. & J. GALLO WINERY “WOMEN BEHIND THE WINE” 2021 SCHOLARSHIP FUND.